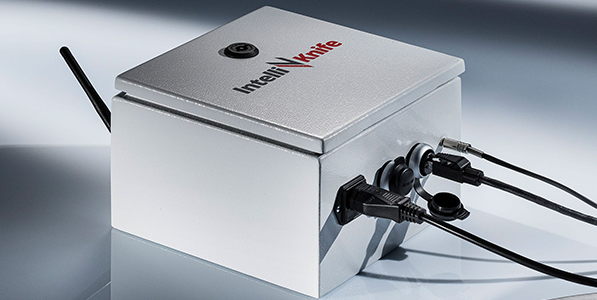 World premiere for the intelligent knife

IntelliKnife is the first networkable knife to be launched on the market. The intelligent knife plays a fundamental role in interconnecting the postpress sector as an integral part of the Smart Print Shop. POLAR supported the development as technology partner.

IntelliKnife is the first networkable knife to be launched on the market. It was developed by knife manufacturer hagedorn. Hagedorn will also distribute the innovation to the markets. POLAR was involved in the development and implementation as a technology partner.

For the first time, the intelligent knife ensures full transparency in the cutting process. The precise evaluation of cutting data promises a wide range of optimizations. For example, all conceivable knife data is stored on an integrated RFID chip, such as its quality, grinding angle, and the number of grinding processes. An RFID reader built into the cutting machine in turn reads the information. The networkable cutting machine sends the collected knife data, as well as errors, setup and run times, to the secure IntelliKnife Cloud. In the Cloud, the data is collected and processed. A clear web-based user interface allows access to reporting and analysis of the machine performance and much more. With its modern interface (API), IntelliKnife easily integrates into existing in-house BDE/MIS systems.

The use of IntelliKnife offers numerous advantages for various user groups. For printing and finishing companies, the focus lies on cost benefits and the holistic transparency of operating data. Operating data is also useful to identify optimization potential that leads to cost benefits. IntelliKnife improves knife service life and cutting accuracy.

Knife grinding companies and print shops benefit with the use of an external hand-held scanner to identify knives from outside the box – without having to open it. Relevant information, such as the grinding angle, and condition, can be both read out and stored on the knife chip.

IntelliKnife is also retrofittable to older machine generations. An IntelliKnife box and the corresponding new knife can lift older POLAR cutting machines from generation E/ED into the new technological age.

Much more information about the functionality of IntelliKnife and its registration process are available at www.intelli-knife.com. For the start, IntelliKnife is available in Germany, Austria, Switzerland and the Netherlands. Many more countries will follow shortly.